This full day allows you to enjoy 2 of Israel’s most ancient cities – Caesarea Maritima and Jaffa – along with experiencing Israel’s most modern, lively, 24hrs. action city – Tel Aviv.
Explore Israel’s past and the present along with shopping and culinary  options in the “City That Never Sleeps” that was also declared as a World Heritage Site for its unique Bauhaus architecture style.

♦ Tel Aviv-Jaffa: Often refer as “The City that Never Stops or Sleep,” Tel Aviv was the first modern Jewish city built in Israel, and is the country’s economic and cultural center. It is a lively, active city with entertainment, culture and art, festivals, and a rich night life.
Situated on a 14-kilometer-long strip on the Mediterranean seacoast, Tel Aviv extends beyond the Yarkon River to the north and the Ayalon River to the east. Hundreds of thousands of workers, visitors, tourists, and partygoers move about the city each day until the early hours of the morning, seeking out the city’s nightclubs, restaurants, and centers of entertainment.

Jaffa is a place for beginnings, both of many tours of Israel, and in the Bible. Jonah’s journey, Tabitha’s restoration to life, and Peter’s conversion of Gentiles all began here. Thus, Jaffa, Tel Aviv’s “older sister” boasts bountiful biblical history, along with charming lanes, antiquities, quiet churches, galleries and a picturesque fishing port. 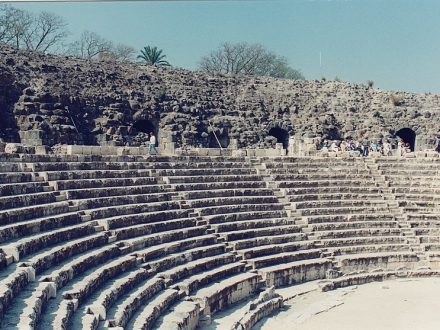